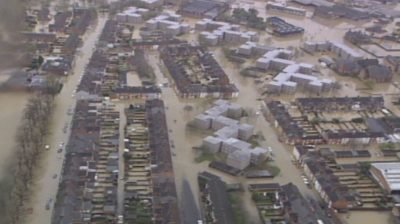 Many have been thinking back two decades this week and recalling Easter 1998. The floods then inundated parts of Northampton and the wider county – and lives were lost. Like many, my own memories are crystal clear.

When I was growing up, everyone knew that Far Cotton along the line of St Leonards Road regularly flooded – it was just one of those things, the line of the Nene Valley running to the south of the town and turning the area into a giant flood plain. But in 1998 circumstances – plus fate – conspired to send vast amounts of rainwater through the Midlands towards the Wash. Far Cotton, St James and the South Bridge area of Northampton stood in its way and the resulting flooding devastated land and homes on an unprecedented scale. Months later, residents were still drying out homes and rebuilding lives. I was lucky – living in Far Cotton, my home was just two streets from the highpoint. With another foot of water things might have been very different.

In 1998 I was working for commercial radio as well as holding down a day job in a bank. On the Thursday before Good Friday I had watched the rain pouring down. My father had told me that the Rushmills Flood Barrage could easily hold over a century of average rainfall. But 1998 wasn’t an average year. There was also the tragic capsizing of a narrowboat at South Bridge and the loss of the woman who had been at the tiller. Not being able to find her had kept the flood sluices closed. So the waters rose…

I will never forget seeing huge areas of the wider Nene Valley submerged under brown, swirling water. Nor will I forget hearing the water roaring through the spans of the Irthlingborough Bridge as I reported from it – it shook. But it’s how the water affected Far Cotton – my home then – that stays with me.

On Good Friday I took Northants 96’s Black Thunder truck, reporting from outside the then bus garage in St James, close to the water’s edge. Before the local community representitve there had finished appealing for boats to get trapped pensioners out of the first floor bedrooms they had retreated to, people had started to emerge with anything that floated. Scouts arrived with steel boats, locals brought rubber dinghies and more than one jetski buzzed around the area, all keen to help.

As well as reporting, I used Black Thunder to ferry St James people to evacuation centres on higher ground in Dallington. Some wore just the nightclothes that they had gone to bed in on Thursday night, having to leave everything else behind. Many were in shock. I also took some of the fire crews back to the Mounts fire station so that they could change, warm up after standing in very cold water for hours and then get back to work. Black Thunder was one of the few vehicles that could get onto the St James retail park and I realised that if the flooding had risen two inches higher, it would have come over the top of the massive flood wall protecting the site. It was dreadfully quiet too.

Could it happen again? Of course. Before 1998 they said it couldn’t happen – but it did. For all the bad though, there was good which came from the floods. Sitting in the street with all his possessions drying out days later, one Far Cotton resident said to me “It’s been quite good really – before the floods I’d never spoken to my neighbours next door – now we’re helping each other.”